“Set aside a certain number of days, during which you shall be content with the scantiest and cheapest fare, with course and rough dress, saying to yourself the while: ‘Is this the condition that I feared?’ It is in times of security that the spirit should be preparing itself to deal with the difficult time; while fortune is bestowing favours on it then is the time for it to be strengthened against her rebuffs.”

“Be systematically ascetic or heroic in little unnecessary points, do every day or two something for no other reason than that you would rather not do it, so that when the hour of dire need draws nigh, it may find you not unnerved.”

In the spirit of Seneca, William James, and Type 3 Fun, my friend and I do a thing every year called Suffertember. The idea is to give up some of our comforts, mindless addictions, and rote habits, and replace them with things that are harder, better, and most importantly, more suffery.

It’s a misogi; what it lacks in intensity it makes up in duration.

It’s a hard reset on things we take for granted in our daily lives. Is eating meat every day truly a necessity for your happiness, or just something you’re used to doing? Do you really need to check twitter every six minutes? Does the daily news media actually make us more informed and better citizens? Or do anything useful for us at all?

The point is to force yourself to go without these things for (at least) a month, so you can attain a true perspective of how they actually affect you – something that’s not so easy to see from underneath the blanket of habit. When you’ve gone without something long enough, it starts to lose its roots in you. You can then choose to add the thing back in to your life, or to instead leave it behind you. If you never do this, you will just end up living a life on default settings; i.e. if you don’t deliberately design your life, someone else will design it for you. 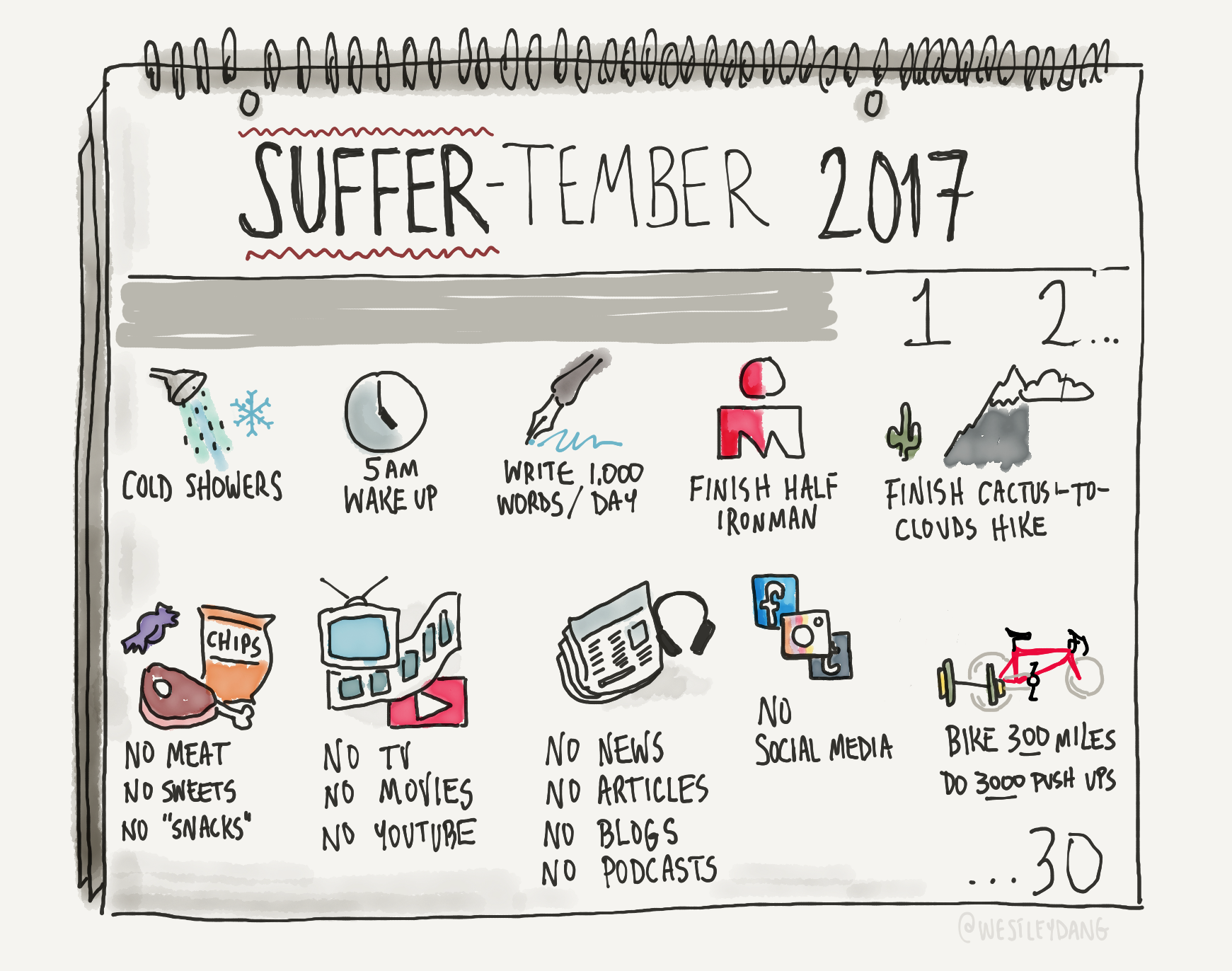 A drawing of the first attempt by Suffertember co-founder @WestleyDang. It went… ok.

Here’s what I’m doing this time around:

This may seem like a silly list of things to do, but as it turns out I’ve been looking forward to this month quite a lot. One of the biggest things I realized in past years was just how much time I spent on things that, on balance, provided so little reward.

When you don’t drink coffee, you don’t have to spend time making it and (once you acclimate) you feel awake as soon as you wake up. Cold showers have a wonderfully abbreviating effect on average shower duration (and also help with the waking up thing). We all know that we spend too much time on social media, but it never really hits you just how much time you waste until you go a month without.

If it wasn’t for Suffertember I’d never have experienced the pre-dawn eeriness of a swim in the Pacific Ocean with two of my friends, and then the mutual hilarity we shared when one of them nearly levitated out of the ocean after being scared by a pack of leopard sharks. I would never have realized that every meal doesn’t have to be based around meat as the main dish for it to be satisfying. I would never have done a triathlon. I would still be wasting time on Facebook instead of deleting it for good.

And that’s just the tangible benefits. One thing I’ve found is that the best way make something hard easy, is to try to do something much harder first. Putting yourself outside your comfort zone for a month at a time accomplishes that. It stretches you. It expands the bounds of the things you will consider fun, meaningful, and within your agency. It teaches you the meaning of “homo sum, humani nihil a me alienum puto”.2 So I’m very much looking forward to the upcoming month, to regaining all those moments that I fritter away so easily, and using them for things that actually matter.

One last note: there’s obviously a lot of privilege involved in doing something like this. Most people don’t have the luxury of a life comfortable enough to think of giving up such things, or the spare time to waste on them in the first place. Does that mean this isn’t worth doing though? I don’t think so. Suffering is an unavoidable part of growth, and in this comfortable world we live in it’s increasingly becoming a skill to not only seek out discomfort, but also to learn to enjoy it.

Here’s a few more pieces of inspiration, in case you are thinking about doing your own (personalized)3 Suffertember:

“If you adherents of this religion actually have the same sentiments towards yourselves which you have towards your fellows, if you are unwilling to endure your own suffering even for an hour, and continually forestall all possible misfortune, if you regard suffering and pain generally as evil, as detestable, as deserving of annihilation, and as blots on existence, well, you have then, besides your religion of compassion, yet another religion in your heart (and this is perhaps the mother of the former) — the religion of smug ease. Ah, how little you know of the happiness of man, you comfortable and good-natured ones! — for happiness and misfortune are brother and sister, and twins, who grow tall together, or, as with you, remain small together!”

“You are in danger of living a life so comfortable and soft, that you will die without ever realizing your true potential.”